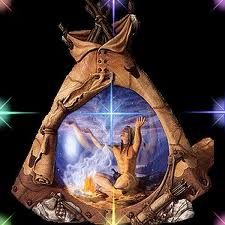 of the ancient Americas were healing the sick with the laying on of hands. They used their hands to cleanse the body, to remove heavy energy and to restore physical and spiritual balance. They used chants, drumming and singing to align themselves and their patients with the energy spirits of earth and heaven.

Native American healing traditions date back at least 12,000 and perhaps as much as 40,000 years.1 While researchers, practitioners and opponents argue the effectiveness and validity of such approaches as Therapeutic Touch and Reiki, indigenous healers throughout the Americas are carrying on the work of their ancestors without a thought as to its legitimacy. Energy healing is, and has been for generations, an intrinsic part of their existence.

Although some healing traditions are still kept secret within the tribes, many medicine people have been sharing their techniques and wisdom with the Western world. While studying with a local shaman in Peru, I participated in an extraordinary healing ceremony. For more than eight hours I was hovered over by an Amazonian ayahuasca master who sang lyrically to the spirits for assistance. Ayahuasca is a hallucinogenic used by South American healers to access spiritual help. Placing his mouth on my back and certain other areas of my body that he had “seen” as afflicted with imbalance, he inhaled and withdrew the undesirable energy and spit it aside. He blew smoke into my ears and onto my third eye and used his hands to brush away heavy energy. These steps were repeated over and over throughout the night until he finally announced that the task was completed. He proclaimed me completely balanced and whole.

Balance and harmony are vital to good health in the Native American cultures. It is believed that some illnesses occur through an imbalance in a person’s behavior or thoughts. But an illness may also be a calling, a spiritual challenge. Throughout the Americas, healers focus on the universal energy as it is represented in nature, as well as the human body. Animals, rocks, sacred places and rituals may all have a part in the energy healing process.

The Luminous Body
Training to be a Native American healer usually involves decades of study and fine-tuning of the ability to read energy sources. Don Juan Matus, a Yaqui Indian trained from an early age by Mexican sorcerers, initiated anthropologist Carlos Castaneda, over a period of 13 years, into the world of the shaman. Don Juan used the term “seeing” to describe the perception of energy flowing through the universe. It calls for a transition to another reality, to another state of consciousness. As Don Juan explained to Castaneda, this transition “was the result of tremendous discipline on the part of the sorcerers of ancient Mexico.” These sorcerers, in being able to see the flow of energy, understood that the “human energetic configuration was, for them, a conglomerate of energy fields agglutinated together by a vibratory force that bound those energy fields into a luminous ball of energy.” The shape of that human energy field was called a luminous egg or ball. They considered this ball to be the true self, “true in the sense that it is irreducible in terms of energy.”2

The healing beliefs of the Andean mountain people are based on two types of energy: heavy energy produced by humans and light energy, which is the energy that puts us in balance with the world and the cosmos.3 This balance is called “ayni” in the language of the ancient Incas. From birth, these medicine people learn to live in ayni with their community and Pachamama, the mother earth, to connect to the lighter energy that comes from their spirit creator.

Balancing the Energy
Ancient healing practices are generally based on the belief that illness, disease and conflict between people comes from being out of balance with these forces of energy and spirit. The healer may use a number of approaches in working to restore balance and harmony.

Wuan Geronimo Flores, great-grandson of the famous Apache warrior, has inherited his namesake’s special healing abilities. He says that even as a young child he knew how to put a person in a trancelike state. In this state he can perceive a speeding up of his own energy, flowing to the patient to release blockage and restore balance.4

The Q’ero tribe of the Peruvian Andes work with the luminous body in various rituals that involve the transfer of energy, frequently including the use of sacred stones and crystals. A more subtle Q’ero technique using energy connection is the process of either ingesting another’s heavy energy or simply releasing it, all through conscious intent.5

In the Navajo community, sand painting is used to symbolize the sick person’s environment, cause of the disease and the chosen cure. Encircled by the community, the sick person sits with a chanter, focusing on the painting’s symbolic images of healing. “Power radiates from the center to all in attendance.”6 Rather than providing the healing energy, the community supports the sick person’s attempts to access his own healing power.

Shifting the Consciousness
Throughout the Americas, a commonality that exists among many energy healers is the provocation of an altered state of consciousness through a variety of methods which may include chanting, drumming, singing, use of hallucinogenics and special incantations. In a similar manner, many Western energy practitioners use meditation, prayer or some other form of connecting to a spiritual entity. This process of transiting to another state of consciousness is similar to Don Juan’s description of the sorcerer’s “seeing.”

Ayahuasca, a drink derived from a plant called “the vine of the dead,” is a staple in Amazonian healing rituals, aiding in creating that shift of consciousness to move into the spiritual energy realm. Tobacco has also been used throughout the Americas to activate a shift from the ordinary. These drugs are assigned a sacred designation and are felt to be a powerful healing source.

Healing with Hands
In a November 1998 article in Alternative Therapies, Ken “Bear Hawk” Cohen describes a Cherokee ritual in which the healer warms the hands over a fire, then uses the palms to circle an area of illness. He cites another Native American practice wherein the healer places his hands at the front and back of the body to conduct an electric flow within his patient.7 These and other ancient techniques involving the hands have much in common with current practices like Therapeutic Touch, both attempting to access what has come to be known as bioelectromagnetics.

Mouth, the Energy Conduit
Sucking out energy and blowing smoke as a cleansing agent are common practices in native healing. Anthropologist Jeremy Naby observed an Amazonian healer named Carlos as he administered to a sick baby. “Carlos lit one of the cigarettes and drew on it deeply several times. Then he blew smoke on the baby and started sucking at a precise spot on its belly, spitting out what he said was the illness. After about three minutes he declared the problem solved.”8 A similar act is cited by Lewis Mehl-Madrona in Coyote Medicine. “He laid the girl down on the earth and put his mouth to her abdomen. Making a loud, sucking sound, he pulled something out and threw it into the fire, where it sizzled and burned. “She is well,” he proclaimed.”9

In the Pima culture of southern Arizona, the healer also uses smoke, singing and sucking out the strength of the illness, sometimes to clear a path for other strengths to enter.10

In addition to using the mouth to administer smoke, healers in the Andes also may take in a large mouthful of Agua de Florida (a heady concoction of flower essences and alcohol) and then spray the substance onto the forehead of the patient to cleanse the heavy energy.

These techniques have their parallel in more conventional energy work that focuses on clearing imbalances and restoring the system as a whole. While many Western practitioners have incorporated the principles of indigenous energy medicine into their work, the cultural norms of our society would most likely prohibit the incorporation of the oral techniques described here.

The Western View
What indigenous cultures have accepted as fact for thousands of years is now being tested in the laboratory. With the growth of energy medicine and alternative therapies in the Western world, research projects on subtle energies are surfacing from leading institutions such as the Institute of Noetic Science and California Institute for Human Science. The march is on to discover the connection between energy medicine and the healing process, with much investigation focusing on the new scientific field of bioelectromagnetics.

Concurrently, shamanic schools throughout the United States are offering training in everything Native American — from vision quest ceremonies to Andean ayahuasca expeditions. These workshops and courses give us but a glimpse into the world of indigenous healing and are certainly no match for the cultural inheritance of the native shaman, nor should they be. But they do offer us the opportunity to learn the healing value of balance and wholeness, a concept that may soon be “validated” by science.

By Shirley Vanderbilt a staff writer for Massage & Bodywork magazine.